Home > Finding Work > Freelance Workers and the Benefits of Networking

Freelance Workers and the Benefits of Networking 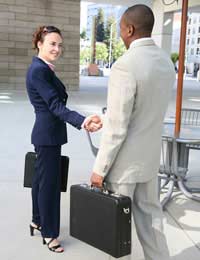 Social networking is a term often applied to online sites such as MySpace, Bebo and Facebook. It is, quite literally, a way to connect and network for social purposes. Off of the Internet social networking can be as easy as joining a book club or film group.

For freelancers, one of the major benefits of social networking is to break the isolation of working alone. Not all freelancers work from home, but for those that do it can be very easy to feel closed in and stuck in a rut. Social networking can help you meet new people and explore new interests. It may even give back a spark that will translate into better, fresher work.

Professional networking is networking with a given professional purpose. It could be to meet colleagues, get in touch with potential clients, find out more about industry trends, discuss an industry issue or even learn a new skill. All of these purposes are benefits for freelancers looking to invest a little more in their own businesses. While sometimes freelancers will not want to attend a professional networking event due to the cost, it must be remembered that even one new job from an event usually more than covers the initial outlay for participation.

Networking With An Agenda

Networking with an agenda is the best way to garner the most benefits from any given event. A freelancer must know why (s)he is attending an event and stating this reason in very clear goals should help him or her to be successful. For example, “to meet the editor of X magazine” or “to put a face to the names I see on online message boards” or “to ask Sally Jones if I can take her to lunch and pick her brain about industry trends” are all concrete goals that have a high chance of success during a professional event.

A freelancer could very easily go broke, and never get any work done, if (s)he went to every networking event available. Instead, freelancers should use some basic criteria to pick and choose the most relevant events. Time, location, fee, who else is attending, who is presenting, what (if anything) is being discussed or taught and which organisation or individual is hosting the event can all be good indicators of whether or not that event will be relevant to the freelancer.

Some freelance workers decide to host their own networking events. This may be because no events exist to meet their specific interests, no events exist in their local community or they do not feel that existing events are meeting their needs.

Freelancers who do decide to host their own networking events should be ready to market the event so that it does not end up being poorly attended and unsuccessful. As organising, marketing and hosting can require a great amount of unpaid work, freelancers might want to consider looking for a sponsor or enlisting the aid of others to help trim the workload.

Working for Former Employers as a Freelancer

How and Where to Place Freelance Work Ads